There are multiple different techniques to introduce and reinforce a target scent to a dog. Furhermore, many trainers add their own twist in it. If there are many efficient ways to do it, how do you know which one to choose?

Before going further, we need to understand the difference with luring and rewarding  for a behaviour. If the dog sees or smells the reinforcement (i.e. food or a toy) and as reaching for it performs a task that we are asking for, it’s called luring. For instance, if we want the dog to heel in a right position on our left side that can be done by luring by holding a treat where we want the dogs nose to be and walking forward simultaneously. It might look like the dog is heeling very nicely, but the reality is that the dog is only reaching out for the treat without giving a thought on how its body is moving or how it’s positioned in relation to the handler. What does the dog learn in this situation? At least many dogs learn that the cue for heeling is the treat or a toy in the handlers hand or armpit and they don’t seem to understand how to heel without the lure.

There is nothing wrong with the luring if that is the easiest way to get the dog to perform a specific task, but we should be aware of the risks that can occur with it. If you get stuck with luring, it’s hard to get rid of it later. To make the best of it, you should only lure for couple of times. Just so that you can see that the dog starts to get the idea and then fade the lure off as quickly as possible. In the case of heeling, you could use the treat or a toy as a lure for a couple of times and guide the dog to the right position, but then leave the lure and reinforce immediately when the dog behaves the way you wanted. In this situation, the dog reacts first the way it thinks it should to get the reinforcement and then the reinforcement follows as a reward of a right behaviour. As as summary: when luring, the dog follows the lure for the allurement’s sake, when rewarding for a behaviour, the dog independently performs a behaviour to get the reinforcement.

When the object is big enough for the dog to see, it doesn’t need to use its nose to find it.

If a dog learns to search and find food with the target scent it is possible that it ignores the target scent if the food is not present. If it is trained to find food, it’s also very likely to react to any food later on. And if the dog is allowed to eat the food it has found after searching, well, you might already guess how it will behave when finding food later at work. We should never think that the dog only connects finding and eating the food to those searches that happen in a specific environment, like training facilities. Dogs are masters in generalising a behaviour to new enviroments. It is very likely that they start searching for food in all the other places too. If the dog is meant to work in many different environments later on, where there might be food, food crumbs, medicine pills, etc. it is very likely that the dog eats what it finds and it might not always be a healthy thing to do. For a dog that only does scent work as a hobby, it might be as dangerous to learn to eat in new environments as it is for a working dog.

What about the toys then? It’s probably not as bad idea to teach a dog to find toys everywhere as it is to find food, but the effects still stay the same as with the food. The dogs know how to generalise, and they might not react to the target scent without the toy et cetera.

So how to prevent the problems related to luring? You can present the target scent to the dog in a can, or if it’s a small object, just by showing it to the dog or dropping it to the ground. Dogs are naturally interested in new things and as they usually have learned that things people show in their hand or drop to the ground are interesting, they come and sniff the target. When the dog sniffs the target, immediately reinforce it by giving food (or a toy) close to the target. Be quick! If there is no response to its sniff and the object is not attractive enough, they will loose interest quite soon. 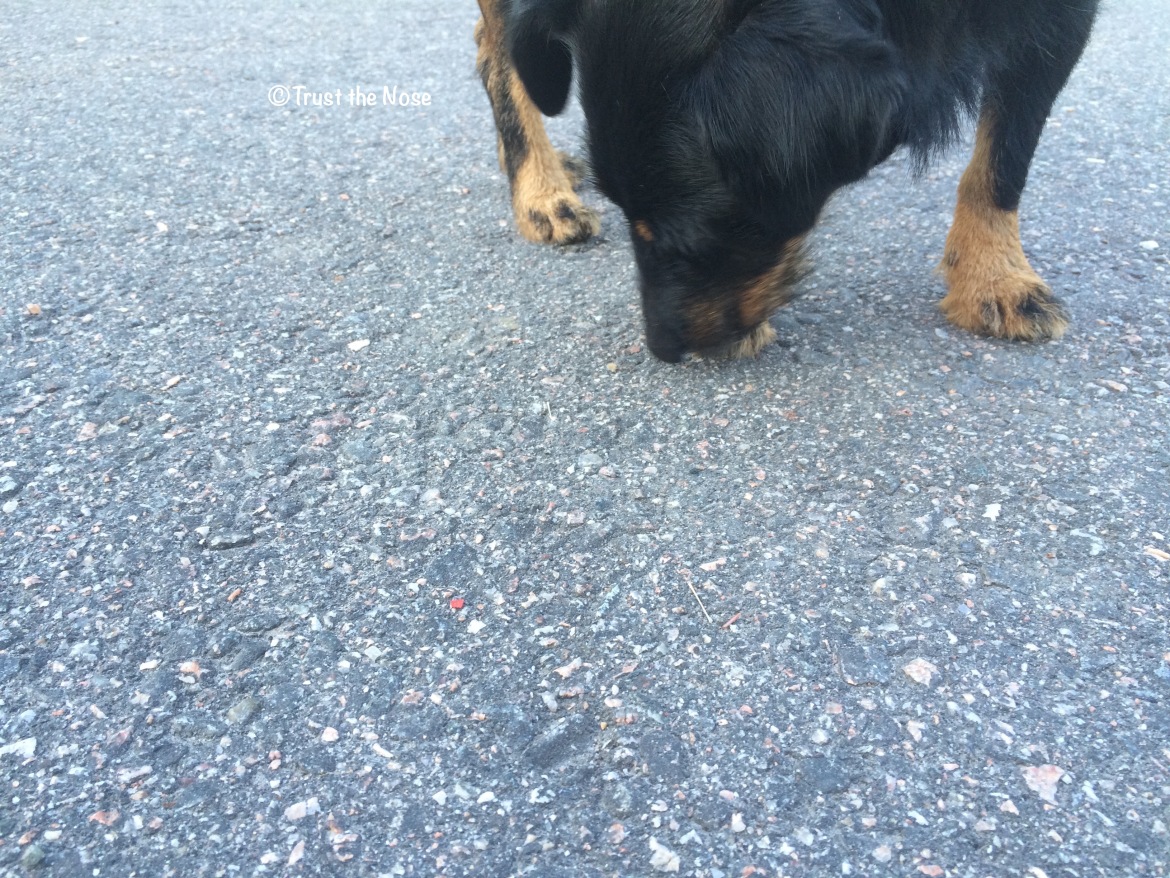 Small object is harder to see. Also dogs can’t see red colour, so the object here doesn’t stand out from the asphalt.

As the reinforcement appears right after the dog has done the behaviour (sniffing the target), it will try to repeat the behaviour to gain some more reinforcements. Now the dog is thinking of what caused the reinforcement instead of only trying to reach it. This is called operant conditioning. The dog needs to think about its own behaviour and how it is connected to the reinforcement. When the dog thinks by itself the learning is much more quicker and you do not need to worry about reinforcing something else than the target scent. Of course you still need to be careful with contamination and understand the vapour pressures of components, but those are themes for another blog post.

Here you can see a two videos about one way of starting scent training with a new target scent. The part in the very beginning, where the target is shown to the dog and thrown to the ground, is luring. After that the dog needs to independently approach the target.

In the second session the target is again shown to the dog. Here you can see how the place of the target is changed and the duration of the alert is getting longer.

Very soon after this you need to make the target disappear so the dog needs to use its nose to find it.

So how do you know which training technique to choose to introduce a new target scent to the dog? Favour the techniques where the dog needs to use its own brain to learn the task. The more it’s getting help the slower it takes for it to understand what it’s supposed to do. By luring you can make a behaviour look good fast, but the learning process is long. However, by reinforcing the right behaviour you can get lasting results effectively.

This site uses Akismet to reduce spam. Learn how your comment data is processed.